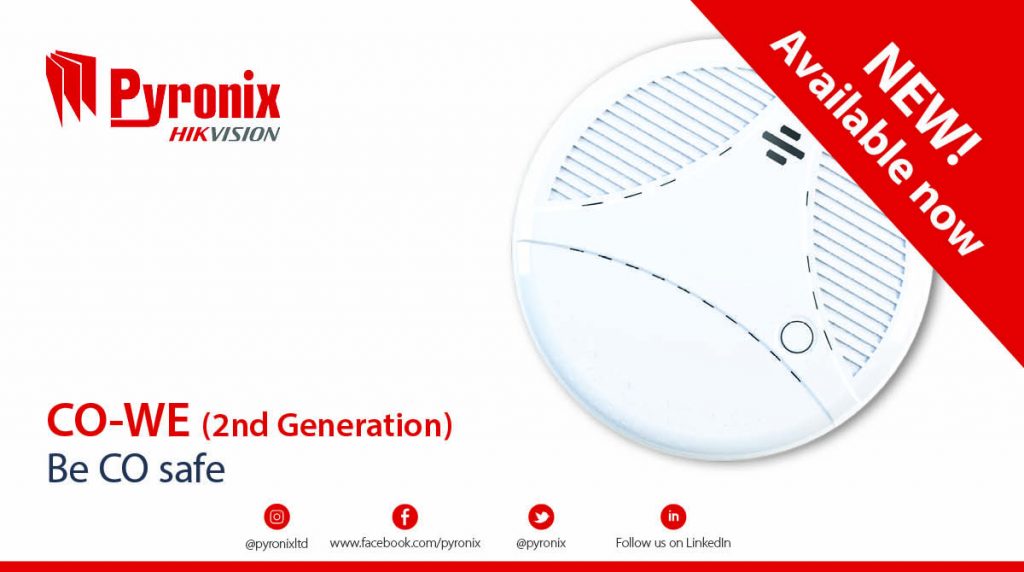 Carbon monoxide (CO) is a colourless, odourless, tasteless and highly toxic gas that can be deadly if it accumulates in enclosed spaces.

The CO-WE (2nd Generation) is an essential lifesaving device, which protects homes and families against this danger; raising the alarm locally via its 85dB sounder and remotely via connected Pyronix smart device apps, if CO is present.

The main detection element features a fixed and non-replaceable L91 lithium battery, continuously detecting within a property and providing peace of mind for 10 years. The radio module which connects to the Enforcer has a replaceable CR123A battery, providing our usual lifespan of up-to 2 years.

Similarly to the recently released HEAT-WE, the CO-WE (2nd Generation) now features a test button on the front of the detector. This is also used as the radio learn button, which cuts down installation time and prevents having to open the detector, to learn onto the panel.

Laurence Kenny, Marketing Director, said: “We’re delighted to announce the second generation CO-WE to our expanding Life Safety range. It provides great new features such as the easy learn button and a superior 10 year battery life in the detector, providing peace of mind and excellent protection against carbon monoxide.”

The CO-WE (2nd Generation) now also features self-diagnostics, meaning if there’s anything wrong in the detector itself, fault messaging within the main element will send the fault over to the panel and flashing LEDs on the detector will denote what the issue is.

Radio features such as encrypted two-way wireless technology, Signal Strength Indicators (SSI) and one-push-to-learn are also included on the detector.

“This release demonstrates our continuous commitment to advancements within our existing products, whilst also remaining focused on developing new products to bring to the market,” Laurence said.

Be CO safe with the CO-WE (2nd Generation).